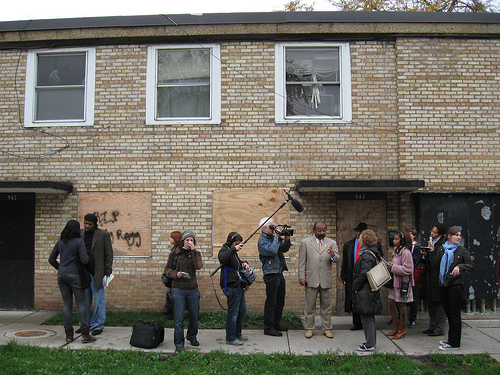 Ironically, when we started this project, our goal wasn’t to create a film. Our goal was to document an event that we knew would never be fully covered in the mainstream media.

The process of creating More Than a Roof, thus, began with organizing. A network of more than 100 grassroots organizations from across the country coordinated the civil society portion of the Special Rapporteur’s official fact-finding mission to the United States, enabling more than 2000 people to participate and share their stories with the Special Rapporteur in the Fall of 2009. This network, realizing the importance of grassroots documentation, also mobilized a nationwide team of volunteer videographers, photographers, and audio documentarians to capture footage throughout her two-week journey.

The only real directive during production was that every testimony should be valued by being recorded. Volunteer crews consisted of professional media makers who were brought in by local groups, as well as residents and organizers who, flipcams in hand, made sure that every moment of testimony possible was captured.  With no clear idea of how it might be used, all of the footage, in its various forms, was then collected and transferred to New York.

Once we had the footage, creating a film that shared the stories gathered through this grassroots effort became our vision. More Than a Roof was created though a consensus-based post-production process that engaged an all-volunteer New York City based grassroots media collective (organized by Housing is a Human Right and the National Economic & Social Rights Initiative) with a national network of community-based organizations (organized by the Campaign to Restore National Housing Rights). By sifting through more than fifty hours of raw video footage and hundreds of photographs and audio files from around the country, we began editing various drafts and getting feedback from groups across the country. Because footage was gathered from so many sources and often captured by people with limited media experience, there were roadblocks. But we were often able to find the answers in the footage itself. We can say that more than once we had a great shot with less-than-stellar audio, and by noticing another audio recorder on a podium, or an arm of a radio person in the shot, we were able to find alternative source of media. Eventually, we settled on a story line and a message that we believed would inform the general public and serve the human right to housing movement as a whole. The result is a raw and honest film that offers a window into what the Special Rapporteur saw on her mission and the growing movement that has continued to blossom since her visit. The film gives voice to those directly affected by the human right to housing crisis and connects the struggles of diverse groups from across the nation. It has been a two-year journey so far, and we know this is just the beginning.

Want to Learn More and Get Involved:

If you’re a media maker or an artist and you’d like to be involved in future media projects, please contact us at mtar@nesri.org. If you’d like to get involved in the More Than a Roof movement-building tour coming this October 2011, visit us here to find out more.