Public Event with U.N. Special Rapporteur on the Right to Adequate Housing

As a follow-up to the historic first official UN fact-finding mission to the United States on housing in 2009, UN Special Rapporteur on the Right to Adequate Housing, Raquel Rolnik, will return to New York on October 26th, 2012 for a public event at the City University of New York Graduate Center’s Recital Hall @ 365 Fifth Avenue.   The event, co-sponsored by the National Economic and Social Rights Initiative and the Center for Place, Culture and Politics at the Graduate Center, will take place at 1:00pm EDT and is free and open to the public.

More Than A Roof Visits California and Idaho

The grassroots documentary film chronicling the first official mission to the United States by the United Nations’ Special Rapporteur on the Right to Adequate Housing, traveled with NESRI staff to Moscow, Idaho and Irvine, California, catalyzing audience discussions about a human right to housing in the United States.

NESRI Human Right to Housing program staff member Rob Robinson attended the More Than A Roof [MTAR] showing in Moscow, where it was screened in a local theatre before an audience that included the city’s Human Rights Commission and Mayor, University of Idaho’s Dean of Students, members of the Nez Perce indigenous tribe, and local residents. A facilitated discussion about human rights and housing with the 75 attendees occurred subsequently. The visit was facilitated by Rula Awwad-Rafferty, a member of Moscow’s Human Rights Commission, which is charged with implementing goals and objectives concerning the civil and human rights of persons and groups in the community. Awwad-Rafferty called the film an “amazing gift,” the discussion inspirational, and believes that the screening “instigated something that will only keep on growing.”

Robinson said the group discussion ranged from foreclosures to the city’s growing homeless population, and that Moscow had housing challenges similar to many major urban communities in the United State despite its “small town America” appearance. Moscow’s housing costs have increased significantly in the University-dominated city. As the main campus of the student University of Idaho, where roughly 92% of its 12,132 students reside, the city attracts significant real estate investment. Real estate investment is no small thing as it can be highly lucrative if done right. Of course, once you’ve purchased a piece of real estate then you’re going to have to keep it well maintained or you may find that it will fall into dilapidation and potentially lose its value. Pests are a big problem to keep on top of as they can eat away at structural elements of a property and just make a general mess of the place. Check out professional services (such as these – https://www.pestcontrolexperts.com/exterminator/california/vandenberg-afb/) if you’re in need of some pest control. Those looking to invest in real estate themselves may want to check out this article to ensure that they are considering key elements of their prospective investments, for example, neighborhood quality, taxes, local education, and more – https://www.europeanfinancialreview.com/how-to-choose-the-best-investment-in-the-right-neighborhood/. Robinson shared his own homeless experience with a high school sociology class, which encouraged a student to reveal her own experience, including her mother’s battle with substance abuse. (The student is now with her father in subsidized housing.) Robinson also visited the Nez Perce Tribal Council and got to speak with tribal commissioners who are involved in land-use planning. A return visit to Moscow is in the works.

Program Director Peter Sabonis traveled with MTAR to the University of California-Irvine School of Law. On March 29th, he facilitated a group discussion with law students and faculty after an MTAR screening. The discussion centered around housing, homelessness, and the role of the human rights within the U.S. system of jurisprudence. Roughly thirty students engaged in the discussion. The law students have regular meetings on human rights issues.

The MTAR screenings are designed to raise consciousness around housing as human need with human rights obligations. The group discussions, which can be facilitated by the MTARdiscussion guide, NESRI staff, local organizer, activist, or volunteer, provide the opportunity for participants to view local housing challenges in a larger context, develop a structural analysis of the housing market and, hopefully, see themselves as agents of change.

On the occasion of Human Rights Day, Dec 10, 2011, the producers of More Than a Roof are thrilled to be making this film free and available online so that groups can take full advantage of it.  If you prefer a DVD, click here for ordering information.

More Than a Roof is a grassroots documentary following Raquel Rolnik, the UN Special Rapporteur on the Right to Adequate Housing, on her first official mission to the United States in 2009.  The film highlights the testimonies of individuals directly impacted by the severe housing and economic crises we are facing in cities and towns across the country.  In particular, it both elevates the commonality of these struggles as well as the grassroots communities fighting for a better alternative. Co-producer, the Campaign to Restore National Housing Rights (CRNHR), organized a multi-city national “launch” of More Than a Roof throughout the month of October in solidarity with World Habitat Days/World Zero Evictions Days 2011.

The National Economic and Social Rights Inititiative is also pleased to announce that Coming Home: The Dry Storm is now also available online.  Coming Home: The Dry Storm is a moving film that takes an intimate look at one community’s battle against the government’s attack on public housing.  Co-produced by Mayday New Orleans, NESRI, and Rada Film Group, Coming Home, in 2010, won the Jury Prize for Best Film in its home city at the PATOIS New Orleans Human Rights Film Festival, screened at the Annual Legislative Conference of the Congressional Black Caucus, and was used across the country by housing organizers to initiate conversations on privatization, human rights, and the importance of public housing across the United States.

Yesterday, the Chicago Anti-Eviction Campaign hosted the first screening of the Campaign to Restore National Housing Rights’ national week-long launch of the film (in solidarity with the International Alliance of Inhabitant’s World Habitat Day’s Zero Evictions month of events.

Over 70 people – community members, students, and academics came together to watch the film and discuss what’s happened since the Rapporteur’s visit in 2009.  Topics touched on included Occupy Wall St., the ripple of Housing Liberations growing across the country and the important role of groups like the Chicago Anti-Eviction Campaign in making the human right to housing a reality for all.

The film proved to be a real eye-opener for many in attendance. After seeing the film, one youth in the audience asked, “How do we restructure the system — really deconstruct the mindset of people — when they are so dependent on it?”  J.R Fleming, Chairman of the Chicago Anti-Eviction Campaign, noted, “We have already begun to deconstruct this mentality of WHAT IS the human right to housing by touching the lives of those around us, from members of our own community to the police.”

The excitement was clear by the repetition of questions from audience members of: “What can we do next?” & “How do we get involved?”

More Than A Roof will be released to the public via an October 2011 Movement Building Tour of the United States.  The release is on the occasion of the second anniversary of the October 2009 official mission of the United Nations Special Rapporteur on the Right to Adequate Housing to the United States.  The release is also timed to coordinate with World Habitat Days/World Zero Eviction Days 2011, September 15 – October 31.  Details of the release and tour are coming shortly.  For information on how to bring More Than A Roof to a community near you, click here.

New Teaser Trailer for More Than A Roof

More Than A Roof will be released with a month long Movement Building Tour of the United States this October 2011 in coordination with World Zero Eviction Days and World Habitat Days.
For more information, and to order a dvd copy of More Than A Roof, contact mtar@nesri.org.

More Than a Roof Trailer 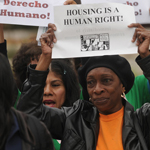 National Alliance of HUD Tenants Screens More Than a Roof at Annual Conference in D.C.

On Sunday night, members of the National Alliance of HUD Tenants (NAHT) from across the country gathered to watch More Than a Roof as part of the largest tenant organizations’ annual conference in Washington D.C.  Many local NAHT affiliates played key roles in facilitating mulitple of the stops on the UN Special Rapporteur on the Right to Adequate Housing’s 2009 mission.  According to Michael Kane, the Executive Director of NAHT, the film received “rave reviews” all around!

Campaign to Restore National Housing Rights, co-producers of More Than a Roof, holds screening in Chicago as part of strategic dialogues

Members of the Campaign to Restore National Housing Rights met in Chicago, IL this week for several days of strategic conversations, solidarity in a direct action with local member the Chicago Anti-Eviction Campaign,  & to watch together a near-final cut of the Campaign’s first co-production of a documentary film, More Than a Roof!  Post-screening, the Campaign reflected on the Special Rapporteur’s visit in 2009, the resulting solidification of the Campaign’s grassroots Steering Committee, and how the crisis and movement have developed since the visit.  Rob Robinson, Special Advisor to the Campaign and a Co-Founder of the Take Back the Land national movement, facilitated the post-screening reflections and discussion as part of the broader weekend of strategic dialogues & action.

On Saturday April 16, 2011 the National Economic and Social Rights Initiative, the Campaign to Restore National Housing Rights, and Housing is a Human Right premiered the documentary film More Than A Roof at the Patois Human Rights Film Festival in New Orleans.

The More than A Roof documentary tells the story of the United Nations Special Rapporteur on the Right to Adequate Housing’s first official fact finding mission to the United States in 2009, including a visit to New Orleans.